– Call to commit to clear 2030 targets for technology deployment 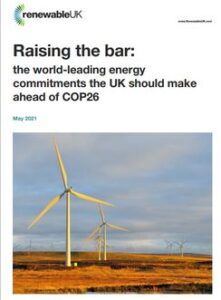 GreenPower welcomes a call by the UK renewable energy trade body, Renewable UK, for governments to ‘raise the bar’ ahead of COP 26 later this year in Glasgow – to demonstrate serious commitment to decarbonisation and to encourage increased ambition from the rest of the world.

“The report challenges governments across the UK to set deployment targets for onshore wind. 30GW by 2030. This is really positive – it would mean a major boost to the drive for building the domestic supply chain, to create many more long term jobs and enable a Just Transition. Without a clear signal from government on what it wants, then the delivery end will always be piecemeal and slow, and not create a coherent approach across all national and local government policy areas.  It is a timely intervention by industry at this time as a new government in Scotland takes shape. Scotland’s share of the onshore deployment target by 2030 would be a minimum of 8GW of new development. This would double current installed capacity in Scotland, and I hope the new Scottish Government steps up to the plate and makes this signal and commitment ahead of COP26.

“It is a shame that no solar target is set by the RUK report, particularly given the Climate Change Committee recommendation to massively increase solar deployment, but the Solar Energy UK and the Solar Energy Scotland trade bodies will no doubt pick up this gap!”

Copies of the report can be found here: ruk_raising_the_bar_0521_v3_.pdf (ymaws.com)