Drumduff Wind Farm is located some 1½ miles north of Blackridge just off Heights Road on land which includes the former Drumduff opencast coal mine. The wind farm is connected to the electricity grid by a new 5km long underground cable which connects into the Scottish Power substation near Avonbridge. The map below shows the wind farm location along with location of the three turbines shown as red dots. 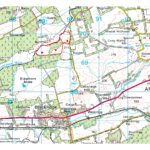 Construction of the wind farm commenced at the end of January 2017. The main civils and electrical works, such as upgrading and creation of access tracks, constructing the turbine foundations and carrying out improvement works on Heights Road was undertaken by our contractor, A E Yates Limited.

Construction was completed in mid-July 2017. Reinstatement works along Heights Road and on the wind farm site were completed and the Balance of Plant Contractor demobilised from site in early August 2017.

The grid connection was made in the early hours of Monday 26th June 2017 with the first kwh produced from the commissioning of the turbines later that day!

All turbine commissioning and reliability testing commenced on 30th June 2017.

Green Breeze Energy have now taken over the site with operational services being carried out by GreenPower Developments Ltd and supported by the locally based GE (Wind Turbine Supplier) Operational and Maintenance team based in Livingston.